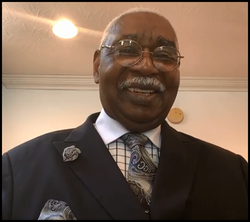 Rev. Floyd Greene is a native of Hopkinsville, Kentucky.  He was married to the late Drexel Wade and they have four children, Michael, Beata, Wayne and Christopher.  They have four grandchildren, Camilla, Cierra, Jamaal, and Ivory; and two great grandchildren, Karsynn, and Israel.

Rev. Greene is a God called, licensed and ordained preacher.  He acknowledged his call to preach in September 1971 at the Harrison Street Baptist Church in Paducah, KY.  His former partorates include The Locust Grove Baptisst Church, Kuttawa, KY and The Greater Antioch Baptist Church, Fulton, KY.  He has served as Pastor of The First Baptist Church, Versailles, KY since May 2, 1986.

Rev. Greene is very active in the District, Regional, State and National Baptist work.  He served eight years as the President of the Kentucky State Fellowship of the Progressive Natioinal Baptist Convention (PNBC). He served as the Chairman of Elections (PNBC), also served as the President of the State President's Department (PNBC); He serves on the Executive Board of PNBC. He served on the Executive board of the General Association.  He served as the Financial Secretary of the Consolidated District.  He currently serves as the Second Vice Moderator of the Consolidated Baptist District Association. Rev. Greene has been commissioned a Kentucky Colonel by two Governors of Kentucky.

On the 16th day of May, 2005, Simmons College of Kentucky conferred upon Rev. Greene the degree of Doctor of Divinity with all the honors, rights and privileges appertaining thereto.

On the 11th day of July, 2013, in a Military Honors Ceremony in Jessamine County, Kentucky, Rev. Greene received numerous certificates and awards for brave and courageous service as a veteran of the United States Army.  He received his third commission for Kentucky Colonel.

Rev. Greene sums up his "Joy in Preaching" with Romans 8:28, "And we know that all things work together for good to them that love God, to them who are the called according to His purpose."